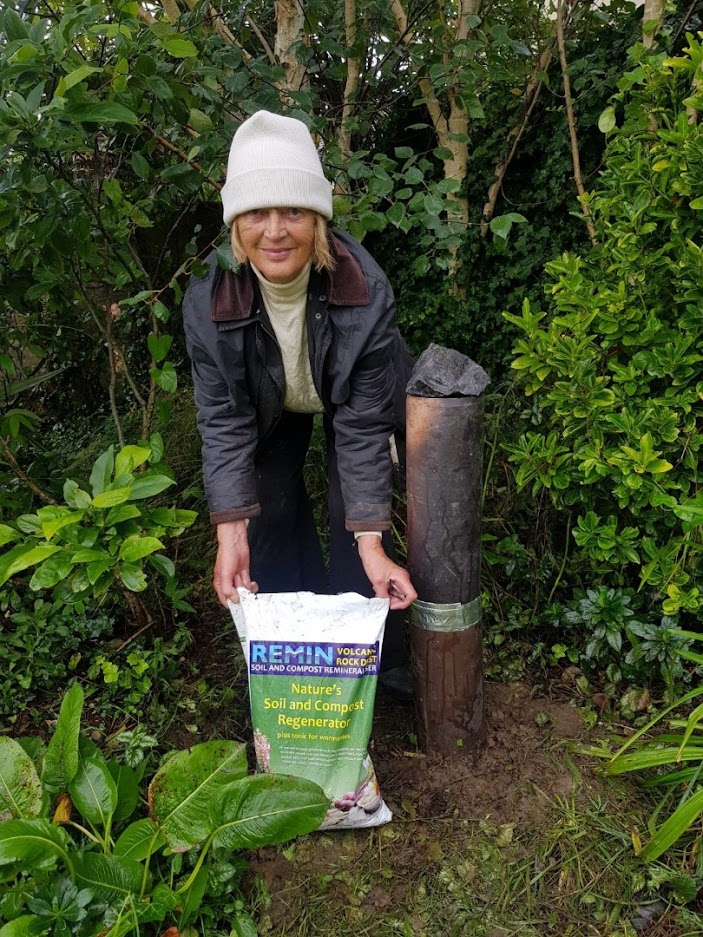 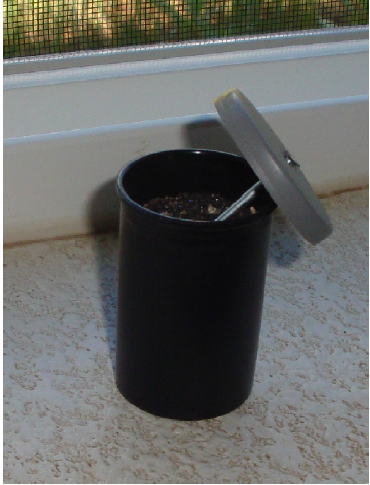 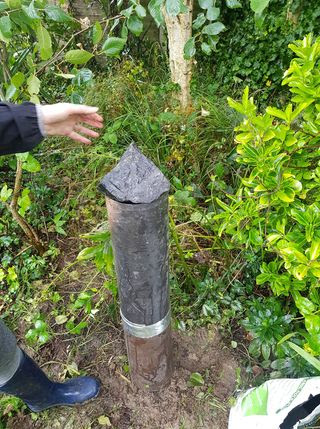 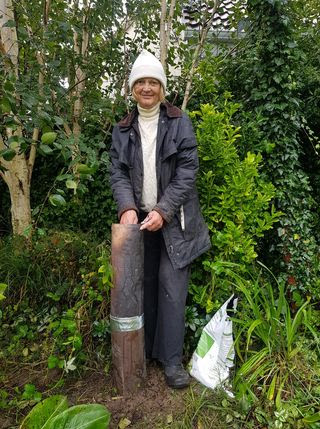 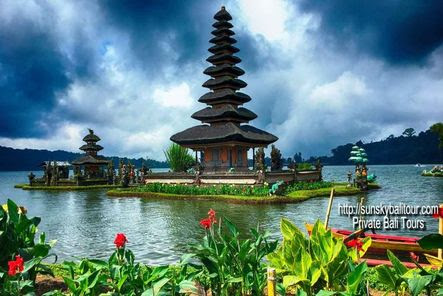 First of all, it is not just the plasterite, there is more to it than just that. In itself it would bring in good results though as I have been having for years. It is not just about size, there is more to that also, it is also about maintaining good health in garden, or the acres you work on , keep pests under control, etc etc etc, there is more to it. It is also about soil life, microbes, bacteria, their prosperity, etc
And, sure enough,  you could , except the Plasterite / Irish Towers, which is all the same, add other techniques, like the magnet wire in the soil, north south orientated and so on and so forth, you could put a spiral in the cone and hook it up to a wire, best galvanized , so it will not rust, and put vines along it, there are many ways and options here.

Also, he has a greenhouse, that in itself is a big plus, esp for more heat loving vegs, fruit, things like that, tomatoes, cucumbers, eggplant, etc they should best, in our climate, be grown in garden house, greenhouse. Than there is this antennae thing, that is an extra, again , using wires, in or above ground and let thing grow next to it, or attached to it.
To that method there is also more as the original concept, from the 1920s  used different types of metal, so it created energy, galvanic energy due to the diff in the metal when exposed to wind, sun, heat, rain, etc etc

Yes plasterite is used , also by others, but also other techniques or formulas, yes you could use sand, basalt, mix it with concrete, perhaps some quartz, there are many options there, some lime or , as we do, plaster of Paris, yes there are many ways to Rome.
We use the most simple base technique that works, does not mean it cannot be changed or enhanced or influenced, etc.  What we do is the most effective, cheapest, strongest way to get results.
Other methods may work too in their own way with some changes at one level or another. Sure.
I have tested the ” cementite” many many many years ago, when those who play with it now where in their diapers 🙂

it is not that long, ten years or so, but tested it, it does work, the method I used was without basalt, it worked but was a lot weaker than the plasterite, many differences, a much more gentle energy it produces, not as potent and ” high frequency” , have not done tests with basalt, think it would enhance  it somewhat, it would give a better product. Main reason, I presume , for the use of cement, is it holds longer or is less attacked by weather influences. Will not deteriorate so easily. Still, I emphasize, plasterite with a good lick of paint holds for ages too. So that is not such a good argument for using a weaker method.

Still, if you would use a good mixture it surely will have an effect, they do use coils sometimes in the product, so they can hook it up to a cable for the plants to grow on or along. That is interesting.
Is it needed, not per se, but it will not hurt.

But we have many different viewpoints as to me , the whole energy thing we do , is mainly focused on healing in different fields, not to grow big cherries….that is a cute side effect but that is not the essence for me. The essence is the healing part, stabilizing nature around me, the world around me, neutralizing the nasty effects of the control grid. THAT is the intention.
Making a blue sky , for example, it also harmonizes the waves, EMF etc.
Things like that.
Sure enough, long ago, I also noticed it did wonders for the garden. Unfortunately I do not have so much space, wish I had, could do some experiments..
To proof it in a more controlled, scientific fashion.
I know it works but you know, the children, out there, the little Fakebook children, they do not understand such things.
Maybe we should make or discuss it in a comic form, who knows, might be the next big hit.

But yes in a greenhouse , with good soil, etc and those techniques, outside too of course, but less, you can have such results, if you really want to.
The simples way would be to bury a few cones in the plot where you want to grow things, indoors or outdoors, does not matter, that in itself should give a good yield.
Using the wires etc would further stimulate growth. Also the soil must be in good order.

In the end that is the base line, good soil. You can also read in those reports, it takes time, to heal the earth, every year it gets better.
Takes a while, the organisms in the ground, will get better, every harvest.
But you will have immediate results, sure enough, but it gets better over time.

I have the opposite problem,  I wish I had a method to slow down growth haha.. I mean all grows crazy here, way out of proportion, keep pruning, have to keep cutting down trees, all the time, as all grows so fast and ridiculously healthy. As you say, where do we leave our 500 pound pumpkins ???? No idea.
But I knew this for years but for me it is a side topic , but , decided to bring it on , anyway, as it may be of interest to some folk out there who can use simple effective proven solutions to improve the outcome of their work, the enhance nature.

I never do anything with my soil, never, nothing and it still grows like crazy. Imagine what would happen if I put on those granite slivers and compost and jadija, could just as well take out the chainsaw to cut it down, would be a jungle in no time.
So yes, it is functional. This is all ancient techniques being RE discovered. There is nothing new about it but for most it seems new, well it is ancient. This was done thousands of years BC I d say.
Did so some posts about it in the ” electro culture” section for more indepth info.

It is true , the censorship is dramatic, again, nothing new to that.
That is why all this stuff is so occult, means hidden.
Hidden from the sheeple.

Esp after WW2 the game was on, on all levels, as we know, to ban all that did not fit into the agenda.
And soon they fine you if you dare to grow a tomato on your patio, without cabal license, we all know that.
It is not really a mystery where this is all going, is it ?
Apple tree tax 🙂
Just wait and see…
They do love us…

But there is , with some effort, still plenty of knowledge to be found, on say the internet archive for example, the old books are still there, not all of them, some of them.
So medical books that openly talk about forbidden stuff like healing with turpentine, etc, that was quite common and it works very well.
Collodial silver and all that stuff was all in vogue and authorized but after WW2 the cabal stepped in, with a heavy hand and the rest is history.

Now we are so dumbed down it is incredible.
Most of us, luckily not all of us, not yet.

There is also a radionics aspect to it all but we wont go into all that, but that has some merit too.

Pumpkin – Atlantic Giant. From the beginning of May to mid-June sow in the open ground on a seedbed and plant out in fertile soil. The champion of all giant pumpkins with a world record of 1054 kg. In the shop you will also find the Elite seeds, which yield even larger pumpkins.

But I found the carrots more interesting, as there you can see truly a major difference in performance.

Anyway, thought I put it up.